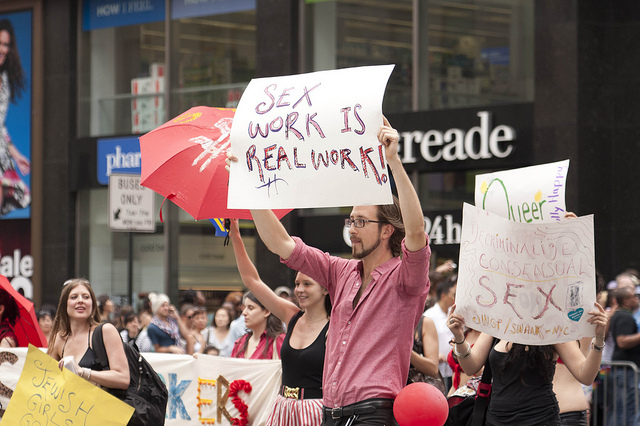 Attwood et al (2013:1) have recently noted that ‘[o]ne of the key concerns within the wider anxiety about sexualization is that deviant, or abnormal, forms of sexuality and sexual practice are becoming “normalized”’. This echoes concerns about the mainstreaming of various forms of commercial sex; most notably, sex work/prostitution and pornography which can be found in a variety of physical and virtual spaces (Minichiello and Scott; 2014; McNair, 2012; Brents and Sanders, 2010; McNair 2006). Concerns about the normalization of deviant/abnormal sexual practices and commercialised forms of sex are largely a function of our social, cultural and political worlds being predominantly heteronormative in character (Hubbard, 2008; Doan, 2011). Relatedly, as Dabhiowala (2012:13) has highlighted in relation to the first sexual revolution during the 1600s, the Catholic and Protestant churches set about reforming sexual morals via ‘an intensification of Christian propaganda, and action, against fornication, adultery, prostitution, and sodomy’.

Moral panics have been an enduring facet of efforts to regulate sex, sexuality and sex work since the Victorian era (Hubbard, 2011; Weitzer 2005; Sullivan, 1997). Such moral panics have traditionally been instigated on the pretence that those directly engaged in supplying commercial sexual services (i.e. women) are in need of rescuing and that wider society needs to be protected from the supposed ‘contagious’, ‘corrupting’ and ‘criminalistic’ effects of particular sexual practices/groups.

The last decade has witnessed ‘a renewed moral panic and crusade’ (Maginn and Steinmetz, 2014) against sex work and pornography (Gira Grant, 2014; McNair, 2012). This new wave of moralism has been perpetuated by an interesting mix of actors – Christian organisations, women support groups and so-called anti-sex radical feminists – from seemingly opposing ends of the political spectrum. Resultantly, there have been concerted efforts in Scotland, Republic of Ireland, Northern Ireland, France, the EU and, more recently, Canada to introduce the ‘Swedish model’. This model seeks to not only regulate sex work but also prevent human trafficking, which is argued to be a major reason why so many women are engaged in sex work. However it is argued by some scholars and various sex worker organisations that this mode of regulation denies the existence of female agency; overlooks the diverse gendered, sexual and generational backgrounds of sex workers; fails to recognise sex work as a legitimate form of labour; and, effectively criminalises sex workers despite the focus on demand. Ultimately, it is claimed that the ‘Swedish model’ does more harm than good by driving sex work underground, thereby perpetuating myths, stereotypes and stigma about sex work and sex workers.

Since the late 1980s, queer studies, inspired by feminist critiques of sexuality including pornography, have critically examined the lives and social encounters of lesbians, gays, bisexuals and transgenders (LGBTs) in the context of their everyday sexual representations and the ensuing activism and alternative, more-than-sexual displays of citizenship and belonging (Attwood, 2002; Zebracki, 2014). These studies have focused on the fluidity and situatedness of the performed and negotiated identities of ‘sexual dissidents’, and the intersectionalities inherent in understanding sexed differences. Ultimately, they serve as a fruitful angle to deconstruct and reconsider the sexual politics encapsulated in the norms, values and legislative frameworks that have come to define hegemonic landscapes of the production and consumption of sex work and pornography.

In conclusion, despite the historical efforts to regulate, contain and even eliminate particular commercial sexual spaces, (consensual) sex practices, and/or minority sexual groups, these spaces and communities have endured and become an increasingly common feature of our cities and towns and given rise to highly complex, dynamic physical and virtual ‘(sub)urban sexscapes’ (Maginn and Steinmetz, 2014). This special session is about exploring and unravelling that dynamism and complexity.

In the pursuit of academic freedom and inclusiveness, the organisers are keen to encourage abstracts/papers from a range of disciplinary and ideological standpoints. Papers may be methodological, theoretical and/or empirical in their orientation and should focus on one (or more) of the following broad, but by no means definitive, topics:

If you are interested in taking part in this special session please send a 250-word abstract, including title, author(s), institutional affiliation(s), e-mail address(es) and 5 key words to ALL special session co-organisers: